Qualitative visual representations of (and in) public spaces 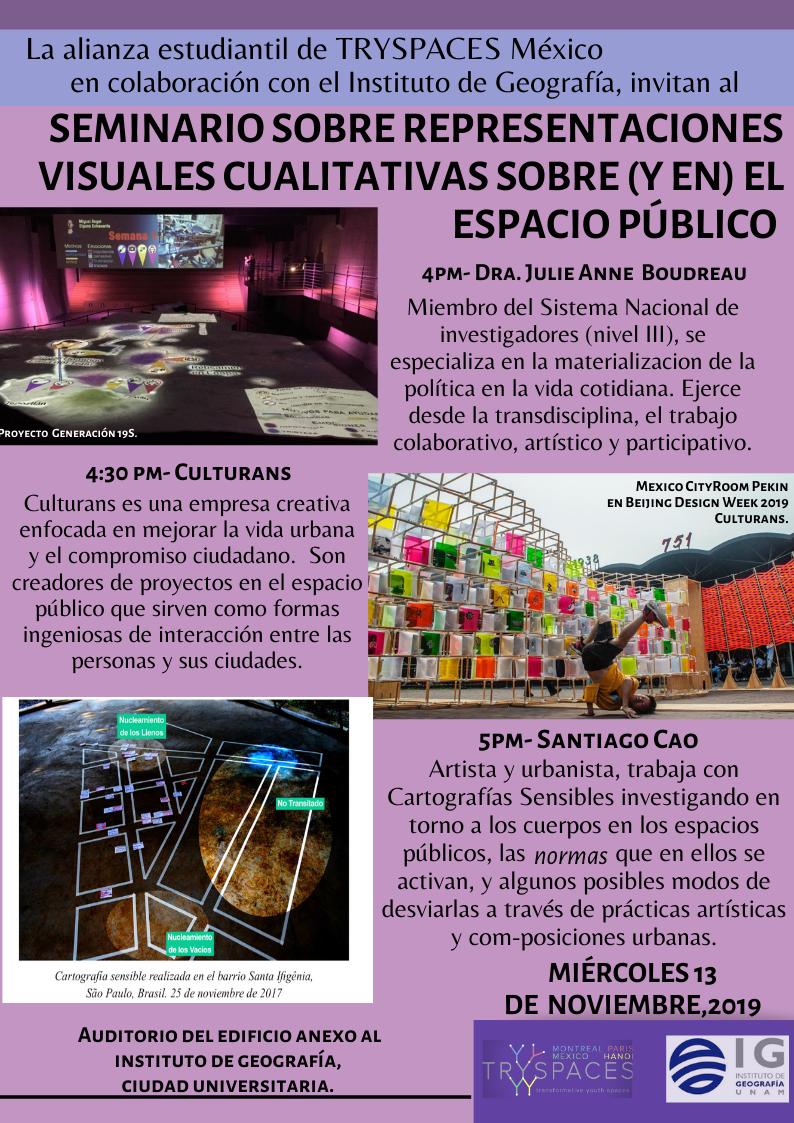 Mexico’s Student Alliance is reflecting on ways to represent space, subvert its hegemonic representations and assumed relationships with social subjects. For this reason, they organized the “Seminar on Qualitative Visual Representations on (and in) Public Space”, on November 20, 2019, at the Geography Institute of the UNAM, to get to know, from artistic, academic and social perspectives, different ways of representing space. The following participants were invited: Julie-Anne Boudreau; Karina López and Juan Erazo, members of Culturans; and Santiago Cao.

Julie-Anne Boudreau focused her presentation around the challenge of representing space comprehensively and based on living categories: practices, emotions and experiences of social subjects. She shared her reflections on narrative cartographies based on some of the projects under her charge. She mentioned that creative mappings break with the functional idea of maps and allow to make visible non-visible scales, therefore they represent and create territories. Thus, she emphasized the relationship between the cartographer and the users of the maps, the power relations implicit in cartography, and the possibility of producing participatory projects to create data and cartographic narratives. She also reminded us of the importance of thinking about the reproduction of visual representations. Finally, Julie-Anne called for expanding spatial representations to include scales related to the everyday life of subjects, for example, the body. She affirmed that from the study of body inhabiting and its transits, it is possible to reconstruct complex views of urban space and accompany it with biographical exercises, artistic tools and appropriate methodological approaches.

Later on, the members of Culturans, a group dedicated to interventions in public spaces, presented their work. They began their talk by narrating the importance of thinking strategies that combine design, architecture and advertising as instruments to promote participation in public spaces. They told us how Culturans, through collective processes with those who make cities, the citizens, create interventions that are practical, familiar and can be appropriate. As an example of their work, they shared Mexico City Room, a project presented at the World Design Fair in Beijing, China. It consisted of a pavilion composed of hundreds of small windows that held scenes of some interactions in the city. The pavilion had a mobile application that allowed, in each of the windows, access to different representations of the city: soundscapes, photographs, videos, or scenes in augmented reality. These tools sought to transport visitors from the exhibition to the everyday spaces of Mexico City. From this work, they drew attention to the rich dialogues between different urban representations, the use of new technologies and the importance of the diffusion of the works on the city.

Santiago Cao, an Argentine urban planner and artist, took part. His presentation began with a small performance to destabilize the order imposed by the auditorium (its architectural design and the disciplinary codes of that shared space). By moving quickly around the room and changing the place of speech, Santiago shared his positions regarding space and its analysis. First, he mentioned that space can be understood as the materiality in which social practices take place and that its analysis can be explored through observations of interactions, the degree of implication and co-responsibility of different practices. To accomplish this work, he proposes sensitive cartographies: an observation scenario is delimited where the practices are analyzed from the relationship of the practitioners with the observers since this is the link that makes possible the comprehension of normality, transgression and the questioning of the social relations inscribed in the space. The result of the cartographies allows understanding the positioning of the bodies and their development in the space, as well as the daily answers: dialogues, gestures, glances, cover-ups. Based on these responses, it is possible to formulate diagnoses that make possible the construction of public intervention proposals that question or highlight normality/transgression.

After Santiago’s intervention, the event concluded. The three participations were rich and allowed us to see dissimilar approaches to space and different points of analysis. The Seminar was provocative to think about the implications of the spatial representations and to decentralize the hegemonic approaches. The students of the Student Alliance of TRYMEXICO thank the speakers and attendees. We invite you to watch the event

Look it up here: 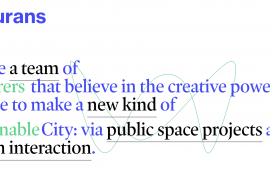