What is the significance of forms of communication that escape formal and procedural discussions on urban planning and neighbourhood consensus-building?

Scholarship on urban planning and neighbourhood consensus-building does not clearly demonstrate the significance of forms of communication that escape formal and procedural discussion, nor does it fully appreciate the challenging nature of speaking in public. In addition, the literature does not show how the stress-inducing process of speaking in public have an impact on the evolution of the concertation process and its results in terms of problematization, decision-making, action plans, vision planning, budget commitment and the creation of partnerships to develop concrete projects in public spaces in response to public problems experienced locally. In this context, following other researchers, we postulate that any performance in public, even the most ordinary, works like a test from which it is possible to elucidate the actor’s “competences” within the consultation mechanism. The application of this microsociological approach to the case of the Integrated Urban Revitalization Programme (RUI) in Hochelaga, Montreal, reveals the communicative and interactive contributions of actors involved in partner meetings.

Launch of the TRYSPACES research partnership 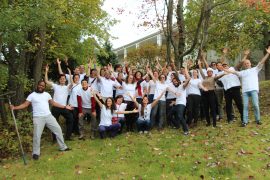