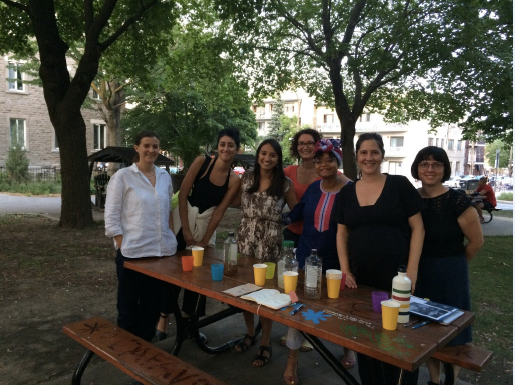 Urban anthropologist Nathalie Boucher is invited to present her work on the urban dwellers of public spaces in Los Angeles, Australia, Taiwan and Canada, with the objective of sharing knowledge but also stories about her, her work and the city.

The formula of the Encounters in the city is simple: 1 woman and her life and city, guests and a coffee or a drink. The organizers, Stephanie Watt and Maëlle Plouganou, came up with the idea after seeing the documentary Les rêveuses de ville. Inspired by these dreamy architects and landscape designers who have thought of the city, often alone among men, we have decided to offer moments of knowledge and stories between women we love. We had imagined that at each meeting, a woman would tell us about who she is, what she does and her city. And that the conversation would revolve around the woman’s work, art or writings, but that these knowledge and stories would never be purely technical or utilitarian.

We proposed to Nathalie Boucher to participate and she accepted. Urban anthropologist, Nathalie has been exploring the human in public spaces for more than 15 years. It is multiplying initiatives in order to better understand how we use the common space, how we behave in public, what interests drive us and motivate us.  Nathalie heads REsPIRE, an organization that provides qualitative research services on the use, perception and development of urban public spaces. She holds a master’s degree in anthropology from Laval University and a doctorate in urban studies from the Institut national de la recherche scientifique.

The conversation focused on his journey, on the paths that led him to become interested in the people for whom cities are built and developed, based on his observations in Los Angeles parks, Australian beaches and swimming pools, Montreal parks and shores, Taiwan’s thermal baths and around Montreal’s construction sites.

The discussion was followed by an invitation to attend the documentary Ovarian Psychos, 2016 (Trumbull-Lavalle, Sokolowski).