In Clichy sous Bois, the research focused on the place that young people take in the political public space, the way they transform it and the modalities of their engagement.

This research corresponds to one of the axes of the Tryspaces program in Paris dealing with the place that young people take in the political public space and the way they contribute to transforming it. As of 2018, an initial work was conducted as part of the POP-PART research on the modalities of youth engagement.  In Clichy-sous-Bois, it was conducted in partnership with the collective ACLEFEU (Association Collectif Liberté Egalité Fraternité Ensemble Unis), which was created immediately after the social revolts of 2005. It showed the great interest of young people in overturning media prejudices, their participation in ACLEFEU’s actions with families and the willingness of some to contribute to the political life of their community. In order to understand and reinforce this potential, it appeared necessary to extend this research with a new participatory research: it aims to analyze the way in which the young people situate themselves in relation to the history of ACLEFEU, to its experience of constitution of a proper political public space.

Check out the Pop-Part 2019 booklet for all the details.

So the project that is being launched (delayed by the pandemic) is to conduct participatory research on the history and memory of this collective. Some young people from Pop Part and many new ones are interested and have been brought together.

The ACLEFEU collective has indeed constituted, since its creation in 2005, an original political public space. It has led many actions to have the rights of citizens recognized and applied, including those of immigrant origin. It has encouraged people to register to vote and to vote, met with the population in several French cities to collect their demands, and organized initiatives that have had a real media audience. Through its elected representatives in the municipality, it also continues to play an important social support role with families and young people.

The objective of this research is for young people to provide concrete information on this history, particularly in their city, to collect documents, record testimonies, analyze them and give their point of view. Workshop sessions with the projection of short films or excerpts from television news, role-playing and debates are planned.

Bringing in the representation of young people, this research will show how and to what extent, through its claim to the French republican motto, ACLEFEU has constituted a public space of regulation, through what transgressions of images and practices it has imposed itself in the media space, what norms of expression and action it has legitimized and transmitted. It will also show how young people of the 2020s, sensitized to issues of discrimination, police violence and gender, appreciate the commitments of the generation that preceded them, the one that lived through the social revolts of the fall of 2005. How do they perceive both the acronym of the collective (which reads in French «Assez le feu») and its development (Association du collectif Liberté Égalité Fraternité Ensemble Unis»)? How does their own commitment relate to the transmission of this experience?

The production of a podcast is envisaged to gather and disseminate this research contribution, as well as a publication.

A new phase of research is being prepared. It has been delayed by the pandemic in 2020-2021. Its objective is the realization of an analysis by young people of Clichy-sous-Bois of the history and memory of ACLEFEU in their city. Bringing the representation of young people, this analysis is part of the ongoing research on the representation of this association in the media since its creation, conducted by Hélène Hatzfeld. It will show how, through its claim to the French republican motto, ACLEFEU has constituted a public space of regulation, through which transgressions of images and practices it has imposed itself in the media space, and to what extent it has legitimized and transmitted norms of expression and action.

Mobilization of youth, ACLEFEU members and partners at the final colloquium of the POP Part research on October 2, 2021 in Paris.
Dissemination of the book resulting from the POP PART research Neighborhood Youth. The power of words.
Realization of the participative research on the history of ACLEFEU with the youth of Clichy sous Bois.

Team participating in the case study 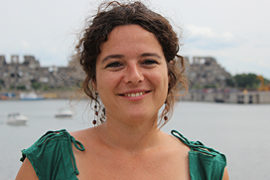